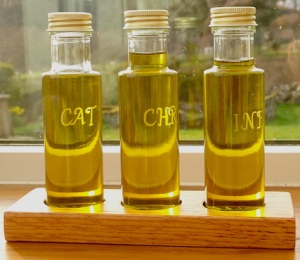 Janet provided the bottles, Tanya engraved them, Sarah filled them and James made an oak stand for them to sit in – St Andrews now has a new set of Holy Oils thanks to teamwork.

Three different oils are used in the spiritual life of the church. The oils are blessed by the bishop at a special service – the Chrism Mass – at Inverness Cathedral during Holy Week and then distributed to all the churches in the Diocese.

The three oils are:

The Oil of the Sick (Inf). This is used in the Sacrament of the Anointing of the Sick. It signified the grace of strength, peace and courage to overcome the difficulties of illness or old age and renews trust and faith in God. This is the oil that is used in what called the Last Rites.

The Oil of Catechumens (Cat). This represents liberation from sin and God’s protection for someone starting out on their journey of faith.

The Oil of Chrism (Chr). It is used during Baptism and Confirmation, It signifies the gift of the Holy Spirit on the newly Baptised or Confirmed.  This oil is usually mixed with a sweet smelling perfume called balsam. To show its importance it is referred to as being ‘consecrated’ rather than just ‘blessed’.