Skip to content
HomeFor everything there is a season 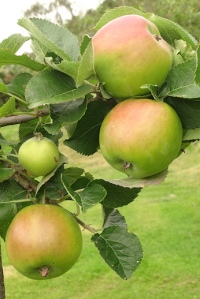 Autumn seems to have arrived quite suddenly, it sort of crept up on me when I wasn’t paying attention. The turning of some of the trees has been hastened by one or two autumn gales, battering the leaves and breaking off branches.

I like autumn, for although the days are getting noticeably shorter, the fruits of the summer growth become ready for harvesting. Growth and maturing that has been quietly going on a little bit each day become much more noticeable and although we had a rather drier summer than usual, the later part of the summer has provided enough rain for some bumper crops of apples and plums. Everyone we meet seems to be asking if we would like apples, but we have apples of our own and as for the courgettes …

It seems that as though we don’t fully realise all that has been going on until we start to gather in the harvest, and then what has been happening quietly under our noses, becomes obvious. I never cease to be amazed that plants such as leeks and onions, beetroot and carrots, which seemed so tiny and delicate when they first appear in spring, grow into such large and robust plants; the blossom on the apple and plum trees, once the bees have done their work, is transformed over the summer into abundant fruit.

Over the last week or so I have been reflecting on the way that this passage of the seasons is to be found in Christian Theology. It is used literally, but more importantly as a metaphor for spiritual growth. The reason for this reflection is of course the time of year, but also because much of the past week or two has been spent preparing for funerals. A popular and very appropriate passage of Scripture at funerals is Ecclesiastes 3:1-15, which starts:

and later on continues:

“I know that whatever God does endures for ever; nothing can be added to it, nor anything taken from it.”

One of the hymns chosen by a most remarkable woman as she thoughtfully planned her funeral were quite unusual, but as I reflected on the words of (particularly the first and last verses), I realise how appropriately they fitted that celebration of a life, that gradually took shape and achieved much. But I also reflected how we perhaps don’t realise all that has been happening quietly under our noses, until it becomes obvious, when we take stock and realise what an abundant harvest that life has produced.

A death often leaves us feeling more like winter than the celebration that is autumn at harvest time, but even then there is hope for new spring growth once again.

Now the green blade riseth, from the buried grain,
Wheat that in dark earth many days has lain;
Love lives again, that with the dead has been:
Love is come again like wheat that springeth green.

When our hearts are wintry, grieving, or in pain,
Jesus’ touch can call us back to life again,
Fields of our hearts that dead and bare have been:
Love is come again like wheat that springeth green.