Yesterday in Tain, we hosted the Easter Ross Inter Church Group’s annual Songs of Praise. The theme that we chose, a couple of days after the autumn equinox, was Harvest. There was a very good crowd who were in fine voice, St Andrew’s church was suitably decorated and there were lovely things to eat afterwards as we shared fellowship in the hall. It was a fitting celebration to mark the end of summer and all the good things that it has brought. 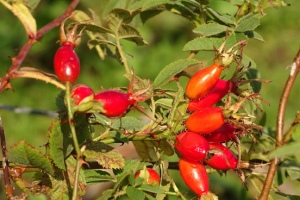 However, the end of one thing marks the beginning of something else. In the case of the seasons, what is beginning is obvious, the end of summer marks the beginning of autumn; but at other times, the end of something seems very much the end and doesn’t readily seem like a beginning. These points are what the spiritual writer Margaret Silf calls ‘Crossing-Places’ and she lists bridges and gateways, causeways and burial grounds – yes burial grounds. Whilst all these types of place can be found in a literal sense, they can also be found in metaphors of what we are facing in our lives; those places where we are crossing from one world to another.

When I was in training for ministry, we spent our summer schools at Kinnoull monastery near Perth and part of the week was a couple of days of silent retreat. I had been reading one of Margaret Silf’s books (Sacred Spaces: Stations on a Celtic Way) and I went for a walk down the hill from the monastery, through the park, part way across the railway bridge onto an island in the middle of the Tay. From the beach at the upstream end, I could seem the traffic on the road bridge, hear the trains on the railway bridge, and see the ford back to the mainland and the old cemetery. I suddenly realised that I was at the confluence of many crossing places and as I reflected I began to see that perhaps the lack of certainty about where I thought I might be heading in ministry might not simply be waiting on God, but a more active trying not to hear what God was saying and a failure to commit. Perhaps not quite in the same league as Jonah’s heading off in the opposite direction when God asked him to go to Nineveh (as we heard in the Hebrew Scriptures on Sunday), but a reluctance to accept God’s will all the same.

Crossing-places can be difficult, something to do with crossing into the unknown. Imagine how the disciples felt when the leader that they had followed and come to rely on was suddenly taken from them. They saw it as an ending, but never in their wildest dreams did they see it as a new beginning. Even when three days later Jesus started His post-resurrection appearances, it took them some time, and a certain persistence on Jesus’ part, to grasp the new beginning and run with it.

All the congregations in the north-east of our Diocese are at crossing-places, one way or another. New ministry is anticipated, just beginning or temporarily postponed. Any or all of the descriptions in the previous paragraph may apply and the challenge for all of us is to move beyond what has ended into what is starting to emerge as a new beginning. We stand at the threshold of the growth that those new beginnings offer. The nights may be “fair drawin’ in” as we move into autumn, but the autumn fruits in the hedgerows don’t just mark the end of the long days of summer, but the start of a new season full of anticipation and promise and an unshakeable hope in God’s goodness to us.

Blessings to you all

One thought on “Thresholds of Growth”