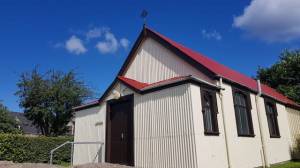 After the 50 years of Exile in Babylon, the people of Israel are permitted to return to Jerusalem and rebuild the Temple, as a result of an edict of the Persian King Cyrus in 538 BCE.

“Thus says King Cyrus of Persia: The Lord, the God of heaven, has given me all the kingdoms of the earth, and he has charged me to build him a house at Jerusalem in Judah. Any of those among you who are of his people—may their God be with them!—are now permitted to go up to Jerusalem in Judah, and rebuild the house of the Lord, the God of Israel—he is the God who is in Jerusalem; and let all survivors, in whatever place they reside, be assisted by the people of their place with silver and gold, with goods and with animals, besides freewill-offerings for the house of God in Jerusalem.” (Ezra 1:2-4)

King Cyrus asks everyone, whether or not they worship the same God, to assist in the effort and contribute gifts in kind. The return begins forthwith.  However the work of rebuilding is halted by the hostility of the Samaritans and doesn’t actually get going until the reign of King Darius I.  Darius orders a search of the archive and finds King Cyrus’s edict and not only silences all opposition, but also commands the rebel kings and governors to assist in every way.

Since April, when I became responsible to getting the repaired ‘tin tabernacle’ that is St Columba’s, ready for use again, I have been struck by the generosity of so many individuals and Churches in providing for us so much of what is needed for a Church to function. All this has happened much as indicated in the edicts of Cyrus and Darius, but without any edict – just sheer generosity and love.

I was reminded of the Return from Exile and the Edict of Cyrus, when I was visiting someone on Monday this week, who asked me to read a passage for her. I reached for the readings for the daily Eucharist. The Old Testament reading for Monday was Ezra 1:1-6 (the passage from which the quote above is taken).

Later on I reflected on how often passages proscribed in our lectionaries for particular days or occasions have an unnerving habit of speaking directly to a present situation or concern. For me this is one of the joys of using a lectionary, we don’t choose which passages to read, removing from us the temptation to read just the bits we like or want to preach on. This allows God to speak directly to us through the pages for Holy Scripture, guiding us to helpful or cautionary verses at exactly the time when we need to hear them.

Anyway back to the People of Israel and the People of Brora. Edict or no edict the various tribes and kingdoms in the Persian Empire did contribute to the rebuilding of the Temple in the years leading up to its reopening in 515 BCE and the People of Israel were very grateful for all the help they received. In the five months that I have been working with others to ready St Columba’s for its rededication this weekend, we have all been touched by the amazing generosity of individuals and fellow Christian communities of different denominations for the help they have given to re-equip our Tin Tabernacle, we like the people of Israel give hearty thanks (though animal sacrifices are not part of the rededication).