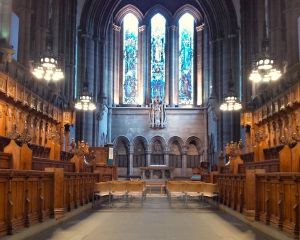 Once we get to Advent we will be focussed on looking forward to the coming of Christ amongst us in the Incarnation. Before that however, we have a season of remembrance, which is often perceived as more focussed on looking back. Successively, we commemorate the festivals of All Saints on 1st November, All Souls on 2nd November and then on 11th November we commemorate those who have given their lives in the World Wars and in the conflicts since. This year is particularly poignant because Remembrance Sunday coincides with Remembrance Day, 11th November, and also marks the centenary of the end of WW1.

At at the start of the WW1 centenary commemorations on the anniversary of the start of the conflict (28th July 2014) I was still employed at the University of Glasgow. For the last four years, on the weekday closest to the centenary of the death of each member of the University who died in that conflict, after the morning service there is a small procession from the chapel to the Centenary Memorial Garden to plant a small wooden cross to commemorate that individual. I remember several such events, though in 2014 whilst I was still in the University, they were few in number. The first was 2nd Lieutenant John Hamilton Dickson of the 1St Battalion, Cameron Highlanders, who died on 14th September 1914. There were a further 10 crosses planted before Christmas.

The last time I passed the Memorial Garden there were almost 750 crosses, a sobering thought, so much talent that never reached its full potential. After the horrors of the Great War, the University wanted a lasting memorial to its dead. In the preface to the Roll of Honour, the then Principal and Vice-Chancellor Donald MacAlister wrote of how the University decided to build its Memorial Chapel.

“After due deliberation it was agreed, with the consent of all, that their memory, and our gratitude for their devotion, should be associated with the place of our corporate worship, to the end that their example might be enduringly impressed upon Glasgow students in time to come.”

As a result, daily worship in the University takes place surrounded by the names of the 755 University members who died in WW1.

In this season of Remembrance, we remember those Christian Saints that have gone before us to show us the way, we remember those that we love but see no more and as we remember those who have died fighting for their country. Let us no simply look back in this season but celebrate the lives of the Saints, all that we learned and all that we shared with those that we love but see no more, and all that we have and have become as a result of those who have fought for their country and for our way of life – Rest eternal grant unto them O Lord and let light perpetual shine upon them. May they Rest in Peace and Rise in Glory.